Towards reforms: Legislative innovations to affect many areas of life for Kazakhstan's people 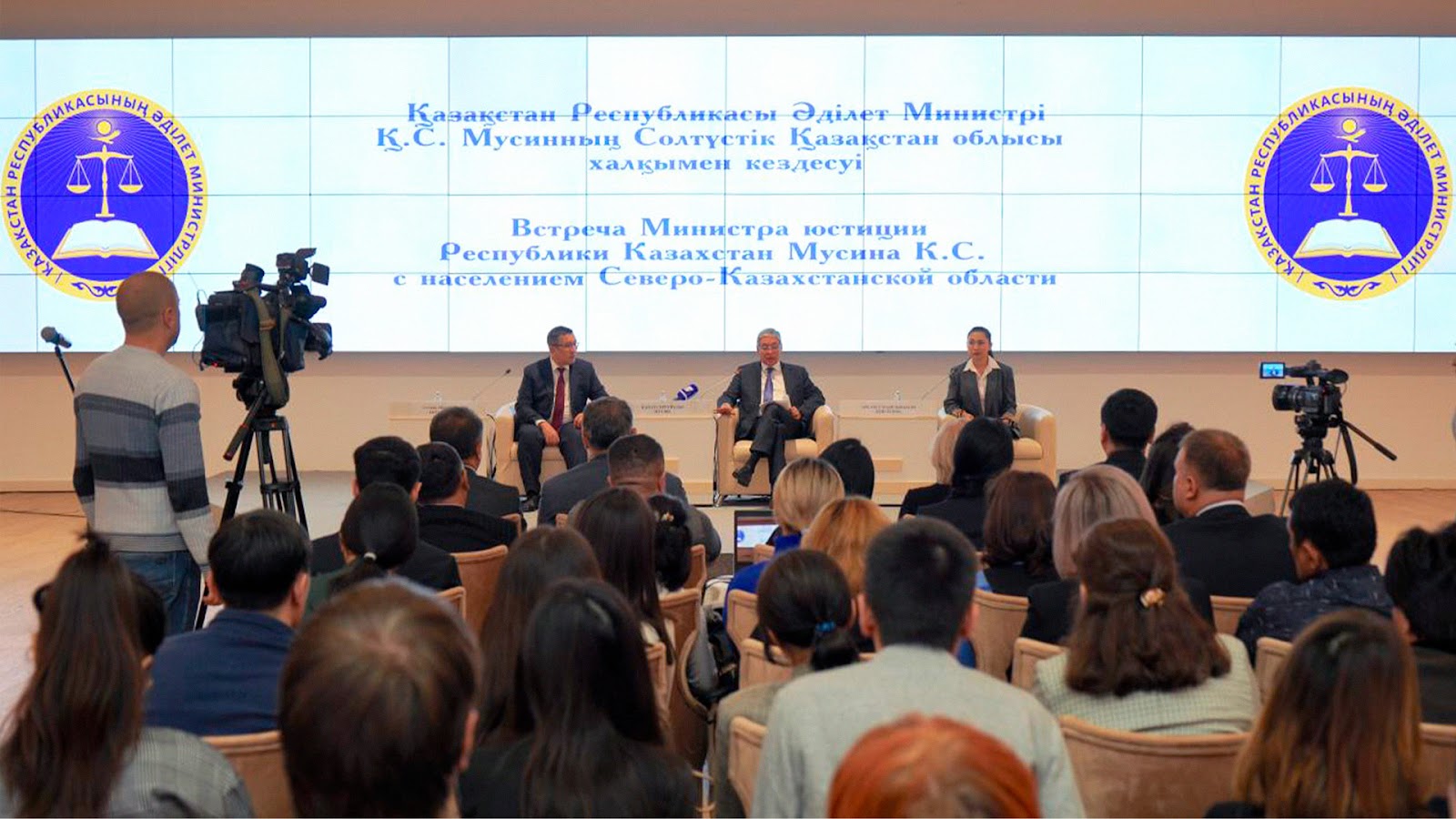 On November 4 this year, Minister of Justice Kanat Mussin held a meeting with the population of the North-Kazakhstan region. The Minister began his speech to the public of the region with information on the implementation of a package of reforms announced by the President of the country in his Address to the people of Kazakhstan.

Let's remember, on June 5 this year on the republican referendum amendments to the Constitution were accepted. Justice agencies are involved in formation and development of national legislation, that's why the primary role of the Ministry of Justice is very important in the process of implementation of reforms.

As the head of agency noted, with a view of bringing the current legislation in conformity with the updated Constitution, in pursuance of assignments of the President of the Republic of Kazakhstan Tokayev, the Ministry of Justice developed 5 legislative acts, including amending constitutional laws on the President, Parliament, Government, on elections, on judicial system.

"Also were developed draft constitutional laws" On the Constitutional Court of the Republic of Kazakhstan "," On the Commissioner for Human Rights in the Republic of Kazakhstan ", a bill amending the laws governing the activities of political parties, the Assembly of the People of Kazakhstan, the Supreme Judicial Council, local public administration, the order of restructuring the Audit Committee in the Supreme Audit Chamber, as well as issues relating to the ownership of the land," Mussin informed.

One of the important changes, according to him, is to amend the Code of Administrative Offences. Some of the bills are now in the Senate of the Parliament. Six laws have already been signed by the Head of State.

For reference: under the amendments:

- The President may not be a member of political parties, his close relatives may not hold political office or senior positions in the quasi-political sector;

- The number of senators appointed by the President is reduced (from 15 to 10), with 5 from the Assembly. The ANC quota of 9 deputies to the Majilis was removed. The Majilis is empowered to pass legislation and the Senate approves it;

- The Government is given the competence to adopt temporary acts having the force of law, particularly in crisis situations;

- The procedure for the formation of the Supreme Judicial Council and others.

Pursuant to the amendments:

- The procedure for drawing up proposals by the ANC for appointment by the President to the Senate is regulated;

- Members of the Constitutional Court, the Central Electoral Commission, akims and their deputies are banned from membership of political parties

- The right of the people to ownership of the land and its subsoil, flora and fauna and other natural resources through the regime of state ownership in the interests of the people is enshrined. The land can be privately owned on the grounds and conditions prescribed by law.

The Minister went on to explain other activities of the judicial authorities. In particular, on the implementation of the state policy in the field of notaries, advocacy, protection of intellectual property rights, enforcement proceedings, forensic expertise, state registration of legal entities and rights for immovable property.

According to the Minister, he receives most of the requests concerning activities of notaries, advocates and legal counsels.

"Currently, adopted amendments to the Law "On Notaries" simplify the procedure of registration of real estate transactions. Now it is possible to execute a transaction at any notary in the country without the mandatory travel of citizens to the location of the property," Mussin said.

According to him, on June 20 this year amendments were made to the Law "On Legal Activity and Legal Aid" according to which the range of people (low income and large families, victims of domestic violence, torture, the disabled of 1st and 2nd category, pensioners) who are guaranteed free legal assistance in the form of legal advice was widened. Citizens may apply to the courts for free legal assistance on a number of matters unrelated to business activities (recovery of alimony in large families, domestic violence, veterans of the Second World War, veterans of combat operations, conscripts, persons with disabilities of category 1 and 2 and old-age pensioners). In addition to lawyers, the right to provide such assistance is now also granted to legal counsels. According to the Minister, during 9 months of the current year free legal assistance has been provided to 7 thousand citizens of North Kazakhstan region.

"Legislative novelties also touched upon registration of civil status acts, real estate and legal entities. Within the framework of simplification of procedures in the sphere of civil registration the terms of registration of marriages were reduced up to 15 days. In addition, birth, marriage and death certificates can be obtained electronically via the e-Government portal and eGov mobile. Moreover, birth certificates for newborns can be obtained through mobile applications of second-tier banks," Mussin said.

Also, he said, accelerated electronic registration of rights to real estate on the basis of notarial transactions has been successfully implemented, which eliminated the need for citizens to apply to "State Corporation" with paper documents for their registration. The time frame has been reduced from one working day to two hours.

"As of July 2022, amendments have been adopted to provide for the registration of non-profit organisations electronically through 'e-government', which eliminates the need for citizens to visit central offices to submit paper documents for registration. To date, 37 public services provided by the justice authorities are available to the public through the eGov mobile application," Mussin said.

In the field of intellectual property, according to the Minister, the analysis of practices, complaints of authors necessitated amendments to the Law on Copyright in June this year in terms of responsibilities of organisations managing property rights on a collective basis.

"These organisations are now obliged to send each author a report of the remuneration collected and deducted from it to his personal account on the organisation's website. In this way, authors can be informed at home of the remuneration collected. The size of the amounts that organizations may use to cover their actual expenses is specified and shall not exceed 30%, including amounts allocated to special funds (for social and cultural purposes to support the authors)," Mussin said.

According to the Head of the Ministry of Justice, the concept of a new intellectual property object called "geographical indication" as well as a system of short-term protection of unregistered industrial designs (not more than 3 years from the date of entry into circulation in the Republic of Kazakhstan) were introduced.

"The introduction of protection for geographical indications will ensure protection of products, including producers of the North Kazakhstan region, whose special properties and quality are largely related to its geographical origin," Mussin noted.

"Execution of judicial acts remains one of the important spheres of activity of bodies of justice. Altogether there are 11 state and 51 private court bailiffs in the North Kazakhstan region. As of today there are 175 thousand enforcement proceedings in the North Kazakhstan region, 78 thousand of which have already been recovered," Mussin informed.

According to him, the significant part of this number are documents on alimony payments in about 8 thousand cases in the North Kazakhstan region. At the same time some debtors, having real financial resources, intentionally evade maintaining their children or hide their property.

On all problem executive proceedings on maintenance recovery judicial executors take measures of enforcement character. For 9 months this year for default of judicial certificates on maintenance payments 95 debtors (in total across the country 2 823) were brought to administrative responsibility. For criminal liability 156 representations have been directed to the bodies of internal affairs (in the country 1,309). A temporary travel ban is imposed on 375 debtors (13,599 nationally).

In some cases, according to the Minister, it is difficult to collect alimony due to the debtor's lack of permanent income and property. In this regard, regional Justice Departments jointly with the Akimats continuously hold job fairs for debtors. For example, for 9 months of this year 78 such debtors were employed in the North Kazakhstan region (nationwide - 1,622).

As to the procedures for repayment of debts, the Minister said that additional services were set up for the convenience of citizens. An opportunity to pay debts online through terminals installed at border crossing points and in public places as well as mobile applications of Caspian Bank and Kazpost have been provided.

"Upon full repayment of the debt, the automated information system of the enforcement authorities (AIS OIP) will automatically cancel arrests on accounts and a travel ban," Mussin assured.

The judicial authorities attach particular importance to awareness-raising work. Drawing attention to this direction of work, the Minister said that to date the Ministry of Justice has provided free access to "Adilet" information and legal system that allows not only professional lawyers but ordinary citizens to familiarize themselves with the text of officially registered normative legal acts.

"There is a 24-hour legal information service 119 of the Ministry of Justice, which provides free advice to the public on all legal issues. Explanatory information is posted on the website of the Ministry and on official accounts in social networks," Mussin informed.

However, according to him, the realities of today present new challenges. Thus, in his message "A Fair State. One Nation. A Prosperous Society" the President of the Republic of Kazakhstan Tokayev set the most important tasks before the Ministry of Justice to correct the criminal and criminal procedural legislation as well as to expand the sphere of administrative justice, including transferring a wide range of administrative offences and civil law disputes with state bodies to the Administrative Procedural Code of the Republic of Kazakhstan.

As the practice of the Administrative Procedure Code demonstrates, the legal mechanisms it contains for regulating relations between citizens and the State enable citizens to defend their rights and interests more effectively. Previously, for example, citizens won a maximum of 15 cases out of a hundred disputes, and today citizens win more than 50 cases in court.

"There is great and responsible work to be done as part of the tasks that have been set. And I am confident that the justice authorities will cope with them effectively," Mussin summarised his speech.